First published by GreenBiz 2012-01-20
Fatima Abdulai is a wife, mother and the first link in the shea supply chain. The fruit she gathers in the northern Ghana bush is the source of shea butter -- the luxurious ingredient in cosmetics and chocolates.

Fatima Abdulai is one of millions of poor rural women who scrape out a living where they find opportunity. In Ghana, the opportunity is the shea nut. In other places, it may be cocoa, cashews, coffee, or hand-made goods. A small loan, efficient technology, and practical advice are the support these women need to help them maximize those opportunities. 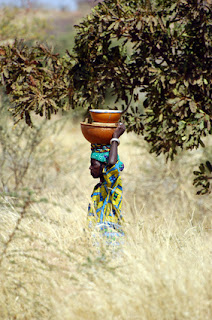 Shea trees are also valuable to the global environment. They store carbon and reduce erosion that puts dust in the air. Increasing shea's worth will ensure that the shea trees are not displaced by other cash crops which use more natural resources and create GHG emissions.

Shea has been an important rural food and medicinal for centuries. Gathering and processing shea was always considered "women's work." In the last few years, exporters started selling nuts and butter to manufacturers in the U.S., Europe and Asia. But shea pays poorly for women like Mrs. Abdulai because middlemen take advantage of individual producers.

Opportunities for women are limited in northern Ghana. For her widowed daughter-in-law, shea is her primary source of income. If Mrs. Abdulai earns enough with shea and her other ventures, she is able to continue her children's secondary education. The U.N. reports that secondary school enrollment is about half the national average in northern Ghana where Mrs. Abdulai resides.

After learning about women like Mrs. Abdulai, SAP -- the business software giant -- sought to help as part of its corporate social responsibility program. But SAP wanted to make more than a financial contribution. SAP believed that its business management technology "that helps companies run better" could be applied to the shea trade.

Improved agricultural trade could benefit more than a billion people who live in poverty in rural areas. "Agriculture is an engine for growth and poverty reduction..." states a World Bank report [PDF], "Research has shown that every dollar of growth from agricultural products sold outside the local area in poor African countries leads to a second dollar of local rural growth."

"We find that companies that put sweat equity into their social projects", said Ivana Damjanov, deputy director of operations, PlaNet Finance, "are more engaged and stay with it for the long-term."
Both partners found the basics were in-place in rural Ghana for the project to succeed; political stability, growing mobile communications infrastructure, and a product with demand on the global market.

SAP recruited a few of its top employees for 6-month fellowships on the Ghana project. During field visits, they learned from Mrs. Abdulai and other women that providing solutions would require more than technology to succeed.

Mrs. Abdulai typically gathers at dawn so she can help her husband on his small farm and manage the household. It is a 15 minute walk to the shea trees where she collects 30 to 35 pounds of fruit before she heaves her basket to her head and trudges back to the village. In the course of the season, she collects almost a ton of fruit.

Vipers, mambas and scorpions lurk in the elephant grass where Mrs. Abdulai collects shea. 1,040 snakebite cases were recorded last year by Northern Regional Ghana Health Service, but incidents are believed to be underreported. Mrs. Abdulai is lucky; she has avoided a snake bite, so far. Unlike her daughter, who was bitten and others who perished.

When she returns home, the next step is to remove the skin and fruit pulp to expose the shea nut, which resembles a spherical avocado pit. Mrs. Abldulai saves some of the fruit, which sustains the family in the "hungry season" when crops have just been planted. 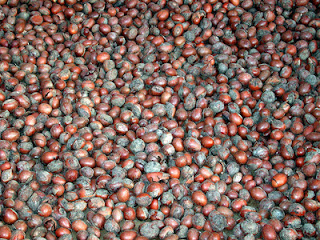 It takes up to two months of drying before the nuts are ready to be transformed into butter. Rushing the drying may also reduce quality. During bad years, Mrs. Abdulai was forced to sell the shea nuts prematurely. She was desperate for cash to buy food, school supplies and other essentials.

The value of shea nuts are diminished considerably with an early sale: A Stanford University study found that the price differential is as much as 82 percent [PDF] for premium nuts that are dried properly.

Because of poor record keeping, Mrs. Abdulai worried that not all of the nuts would be accounted for and she would be short-changed. She has good reason to worry, it turns out: "Some three-quarters of all adults in the north are illiterate," reports the U.N. -- including Mrs. Abdulai and the women in her village who do shea work.

Brokers come to the villages since it is difficult to get to the market. The brokers buy the small batches of butter and nuts and then sell at a large mark-up to the exporters or other manufacturers. Mrs. Abdulai's cache of nuts in past seasons was only enough to partly pay for one child's tuition. She heard that manufacturers pay much more than what the brokers offer the small producers, but what could she do.

Working with SAP and PlaNet Finance colleagues around the globe, the project team developed a holistic solution to resolve the core issues.

• No data: Build an order management tool --- Rural Sourcing Management (RSM) --- to capture and share key data about the product and market prices. The tool uses mobile technology, cloud computing and SAP software. The RSM tool is used by field officers, who are literate and able to use the technology after training.

• Product quality: Educate women on how to improve quality to satisfy the standards set by highest paying customers.

• Weak position as sellers: Set up an association, Star Shea Network, among small shea producers to eliminate the brokers. Recruit a more educated person in the community to record notes from meetings and assist with bookkeeping. Negotiate a long-term contract with a manufacturer seeking organic, fair trade and high-quality shea nuts and butter. The detailed product data provided by the new system and consistent quality were key factors in closing the deal.

Under the new program, Mrs. Abdulai joined the association. She qualified for loans to purchase additional tailoring machines for her small business and protective gear for picking. She has repaid these loans. With the additional income she earned, Mrs. Abdulai paid school fees for her three children. Mrs. Abdulai is grateful that the program "opened up her shea business to the world."

The program also cultivated Mrs. Abdulai's leadership skills. She said, "I used to be very shy, but now I educate my colleagues, organize the association leaders and assist them in carrying out their roles."

Imagine Building an App to Connect With Your Customers and Stakeholders
Contact me to understand how to develop a simple app that compliments your brand strategy
claudia@g3biz.com
To learn more about other IT Green services >>