Dahlia: A Summer Beauty with More Than Hot Looks

My favorite summer bloom is the dahlia. When the roses are tired, the irises are a distant memory and the lilies have trumpeted their last hurrah, dahlias invigorate the summer garden. They produce large, colorful blooms with varieties that range from diminutive to towering.

Dahlias provide more than aesthetic sustenance. They started as an important foodstuff, were transformed through genetic engineering into a flowerbed superstar and then identified as an early sugar substitute.


Food for Body and Soul


The  indigenous people of Central America grew dahlias for food. The tubers are similar to sweet potatoes. One cultivar provides a mocha-flavored extract when roasted. Dahlias continue to be used in native cuisine.

Dahlia seeds were first brought to France in colonial times with the intention to use in agriculture. The plant was ill-suited to European conditions and grew indifferently.

They lingered as specimens for collectors. The flowers were modest compared to the modern regal blooms. In the early nineteenth century, breeders created a dahlia flower with two rows of petals which increased the plants popularity with gardeners.

Nearly 75 years after the first dahlias were imported, a dutch botanist received a shipment of plants and seeds that had rotted during transport. Desperate to salvage his investment, he planted a piece of the root that appeared healthy. He discovered that the root produced a showier and brighter flower, which became the forebear of the modern cultivars. Propagation via tubers is also more reliable than seeds.

Although flowers were now the focus, dahlias found success in a specialized food niche. Prior to the discovery of insulin, diabetics replaced sugar with the sweetener in dahlias that bypasses digestion.

Dahlias were in decline as a sugar substitute since the discovery of insulin. Given interest in a healthier lifestyle, the type of sugar found in dahlia is experiencing a resurgence in processed foods because it replaces sugar, fat and flour with significantly fewer calories and a low glycemic index. They also increase the healthy bacteria in our gut and the absorption of calcium. 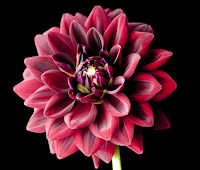 Dahlias are beautiful and hardworking. They deserve the accolades bestowed by an anonymous admirer whose verse was captured in the book Flora's Interpreter published in 1832:

"In queenly elegance the Dahlia stands
And waves her coronet"