How Heroics Can Backfire 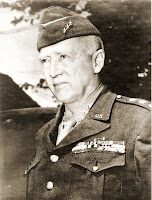 What causes a leader to blunder? That question  came to mind while watching Ken Burn's documentary, The War. The episode that triggered thoughts of ill-advised heroics was General Patton's botched attempt to rescue his son-in-law who was imprisoned in a POW camp more than 50 miles behind German lines.

The attempted rescue was a disaster. All of the equipment was lost. Of the 307 soldiers sent on the mission, the vast majority were taken prisoner; only 35 returned, and 32 died. Many POW's were killed and injured, along with the target of the rescue, Patton's son-in-law who was seriously wounded.

There was limited military value to free the prisoners. Resources were better used to continue the planned invasion and liberate the POW camp when that geographic area was captured and under Ally control. The camp was liberated just nine days after the failed attempt by the14th Armored Division.

2. Limited data
The task force had no maps of the area, did not know exactly where the POW camp was located and asked local Germans for directions. They also had no idea about resistance they would meet along the way or when they arrived at the camp.

3. No contingency planning
The task force was spotted by Germain air reconnaissance which sent reinforcements to intercept the Americans. Once they arrived, it was determined that there were too many prisoners to take back and rather than prioritizing by medical condition, those of highest rank were offered a ride while the others were told to flee on foot. By this time the Germans had the camp surrounded and quickly recaptured prisoners and most of their rescuers.


"I sent a column to ... where John [Patton's son-in-law] and some 900 prisoners are said to be. I have been nervous as a cat… as everyone but me thought it too great a risk…. If I lose that column, it will possibly be a new incident. But I won’t lose it."

That's what we all think in the heat of battle. We can pull this off. While Patton's folly is egregious, many of us have fallen into the heroics trap. A "quick-win" that becomes a quagmire. A deployment goes ahead even though it is not ready because we need to show progress or meet a bonus goal. Sometimes we get lucky and get out alive but other times we cause significant  losses.

The next time there is a "bet big" decision, my plan is to stop and ensure that my goal is enabling the larger cause and then to remember to get the data to do the job. Although we sometimes get stuck in analysis mode, the opposite is just as dangerous.

Sometimes data is not easily acquired. Then it is even more important to go small and be ready to head home. Or go in with overwhelming resources to take care of any unexpected issues.

Patton says it best, "A pint of sweat saves a gallon of blood."