Get Out the Vote: Use Change Management

It is election season and pundits are lamenting poor voter turn-out [1].  Could change management increase voter turn-out? There is ample evidence that it would.

In this article, we will review the three standard techniques to change behavior and how they may be applied to voting.

If voting was a retail transaction, it would go bankrupt. What if Starbucks required registration, provided few places to buy, and then required customers to wait in a long line. Once customers reached the barista they needed to prove they were Starbucks customers. To increase voting we should borrow from the retail masters.

Voting That Fits Voter’s Habits
The part of the brain dedicated to planning in advance is the smallest portion and tires easily. Pre-registration relies on this weakest cognitive tool and forces voters to think about voting months in advance.

Voting for many is decided closer to election day. A handful of states have eliminated registration or allow same day registration. States with Election Day Registration have consistently higher turnout than states that require hyper-organization. [2]

More evidence on the impact of registration is the fact that those who do not move and hence do not need to re-register, vote more often.

Pre-registering voters is a technique used in Germany and Finland. Compared to other European countries, they enjoy higher than average turn-out. Pre-registering works because it is a form of “opt-in”; a classic change management tool that was popularized by Thaler and Sunstein in their book Nudge.
Convenient as Starbucks
Voting centers that are located where people already visit increased voting by 10%. This is analogous to placing an ATM at the grocery store or a Starbucks every few miles. Much of the increase is for voters who would normally stay home. [3]

A longer voting period also increases convenience and reduces peak load so lines are shorter.
Church groups and other advocacy groups are grass roots efforts to help citizens with the process of voting.

It is also an example of social support which will be discussed later. 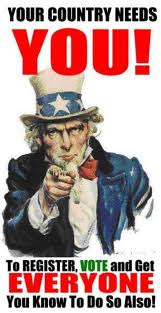 My Vote Counts
Indicators show that when an election is deemed important, voting increases. Presidential elections on average have higher turnout than other elections. An election that is close generates higher turn-out than a lopsided race. Swing states turn-out more heavily.

Similarly advocacy groups encourage voter turn-out by focusing voters on an issue where their vote could sway the outcome.

To further increase the value of each citizen’s vote, many have advocated eliminating the electoral college and counting the popular vote directly.

Rational allocation of districts is another tactic to increase participation. We need to avoid gerrymandering which increases the odds significantly for one party or the other and distorts the voting process. [4]

Peer Pressure Works
The Swiss have experimented with social support by signaling who has avoided their civic duty. This works well in villages where citizens already enjoy strong social bonds. Sharing information about non-voting citizens, appeared to shame the malcontents into voting. [5]

Although the Swiss approach does not fit our culture, its use of peer signaling has merits.

Feedback Loop
Apple used signaling when it first introduced its iPod. Apple’s unique style of earbuds signaled to others that the wearer was a hip Apple user. The earbuds became a positive feedback loop by increasing visibility which led to more users which then further increased visibility to attract even more users.

Analogous to earbuds, the “I voted” sticker could be used to signal that voting is a social norm. Stickers have been handed out after voting for years, but unless the individual voted early and wore with pride, then his fellow citizens would not benefit from his good example. Switching from stickers to social network badges that would accrue for each election would make voters more visible.  [6]

For me, voting is already easy, compelling and socially supported. I vote using an absentee ballot. Since I move infrequently, I rarely need to bother with registration. As a naturalized citizen I feel a special honor to vote.  Discussion of the issues with friends and family reinforces my commitment.

But what about those voters whose circumstances make voting difficult? We can use these simple and low-cost change management techniques to “Get Out The Vote!”

1.      Surprise – Voting is Holding Steady, Not Declining.
The impression that voter turnout is declining is erroneous.  Most voter turn-out calculations use number of voters compared to the total population of adults to calculate a percentage such as 52%.

But total adult population also includes ineligible voters such as felons and noncitizens.  Ineligible voters grew from 2 to 10% during the period when voting supposedly declined.

Although the decline is over-hyped, we can still do better than 55 to 60% of eligible voters.

2.      Increase in voting where pre-registering is eliminated
As documented by Brennan Center for Justice in its Voting Rights paper, “Voting rights advocates have long praised Election Day Registration (EDR). Because it has existed in some states for nearly forty years, there is a substantial record of its benefits. States with EDR have consistently had higher turnout than states without, and the top five states for voter turnout in 2008 were all EDR states.  There is also evidence that EDR specifically increases turnout among young voters.” Read the full report [PDF] >>

4.      “Winner take all” holds down voting
The winner take all of presidential politics is making voters in many states feel disenfranchised leading to less voting. In addition, like-minded individuals living in the same areas (blue states on the coasts and red states in the heartland and south) reduces turn-out since the majority is likely to win.  Read more at The New York Times >>

5.      The Swiss experiment to use peer pressure to encourage voting. Read the paper [PDF] >>
In addition, U.S. researchers did a similar experiment with good results. Read the article at Political Science Mag >>