First published by GreenBiz on 2011-09-13and covered by TreeHugger
Silicon Valley is well known for its exciting new technology. For nearly 20 years, one builder has followed the Silicon Valley way by continuously innovating.

John Suppes, founder and president of Clarum Homes has been shattering energy efficiency records while appealing to the demanding Silicon Valley executives who are his primary customers. His most recent development is the first certified passive house on the San Francisco Peninsula that realizes a 90 percent improvement in energy efficiency compared to a standard home.

Why Green
Suppes shared more about his firm's mission. "First and foremost, it is a commitment to the environment," he said. With a clear mission to drive his company's strategy, Suppes has sought out leading edge building techniques to ensure that the homes his firms builds require a small amount of natural resources to operate. 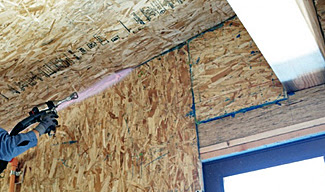 In 2002, Suppes was an early adopter of an integrated building systems approach that is supported by the National Renewable Energy Lab research. NREL's goal is to share research on building homes that require minimal or "near zero" energy. Since then, all Clarum homes have been built using near zero energy principles. More than 400 homes to date.

The Next Evolutionary Step: "Passive" Homes
Most recently Clarum Homes built a certified Passive House in Menlo Park, Calif. A "passive" house is named to contrast with the traditional home that uses "active" mechanical systems to heat and cool the home. In comparison, a passive house is designed to rely very little on mechanical systems and uses non-mechanical or passive methods such as insulation and site orientation to maintain comfortable living conditions to reduce energy use by 90 percent.

A passive house requires strict compliance to a set of performance standards. To be certified a passive house, the building shell must be virtually airtight and pass a blow test that measures how much air leakage.

Suppes explained that a traditional home has hundreds of small leaks, even with the door locked, the windows closed, caulking in-place, and insulation that meet current building codes. The Department of Energy estimates that 25 to 30 percent of a home's heating or cooling energy is lost due to leaks. A well-insulated Energy Star house will experience 10 times more leakage than a passive house. Older homes can be well over 30 times leakier.

The passive house standard also specifies aggressive energy goals for heating / cooling and total energy use to cover appliances, lighting and other homeowner electronics. Passive houses are superheroes when it comes to heating and cooling. Compared to the most popular green construction methods, LEED and Energy Star, the passive house uses a whopping 80+ percent less energy.

Some may point out that California's mild climate makes it easier to achieve the heating and cooling goals. That is true, but the other passive prescriptions -- air tightness and insulation -- were achieved. These prescriptions are intended to ensure performance in more extreme climates. In fact, Clarum exceeded the air tightness test by 65 percent.

Pro-Active Design Beats the Brute Force "Active" House
To achieve this high level of energy performance, the first step is design. Modeling software was used to design the energy measures appropriate for the house and its site.

Building orientation is the first consideration. Solar gain through windows is used in winter to warm the house, but solar gain in summer is avoided by limiting windows with a southern exposure.

The next step is to create an airtight barrier to prevent cold air from getting in and warm air leaking out on a cold day. The reverse process holds for a hot day. Once the house has stabilized to a comfortable temperature it tends to stay that way.


The passive house used a new building material, Structural Insulated Panels, SIPs manufactured by Premier Building, that provide both insulating and air-tightness properties. SIPs are made by sandwiching a rigid core of Styrofoam between two panels of wood.

The SIPs were cut to order for the Clarum project. Suppes found that building with SIPs saved time, money and labor. The framing time was cut by 40 to 50 percent. Waste was reduced by two-thirds.

As we know, an energy drain in any home is its windows. Suppes advised to "spend on the windows and exterior doors." Suppes installed double-pane windows by Serious Energy. Exterior doors and operable triple pane windows were installed from Gaulhofer. He pointed out that the seal when the windows are closed is critical and hard to achieve on operable windows. The Austrian Gaulhofer windows were selected because of its five lock-points, durability and other high performance features. 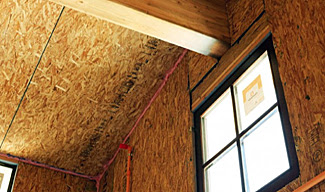 The installation of materials is critical to achieve the highest level of performance. The construction team went beyond the typical visual inspection. Suppes explained, "We conducted a blow test prior to the installation of drywall and then again for certification when the house was complete. Doing the test before drywall installation helps to identify areas that need more sealing before it's too late."

A sealed house without proper ventilation would be a disaster. It would be unhealthy because of the stagnant air and the build-up of condensation would provide a breeding ground for mold. The breakthrough that makes passive house design viable is its innovative central ventilation system. Suppes used a system by the German firm Zehnder.

Heat is transferred with 90 percent efficiency from the stale air leaving the house to fresh air entering from the outside. The outside air also passes through a HEPA filter to remove any dirt, dust, pollens and particulate pollution.

Attracting More Than Green Ideologues
To stay in business, Suppes needed to find a way to translate his environmental mission to a message that was intriguing and a product that satisfied discerning customers. Even those homeowners that share his environmental concerns still want a "normal" house and not a green experiment.

Suppes proves that environmentally friendly is homeowner friendly. Too often "environmentally friendly" is presumed by consumers to require sacrifice -- fewer features, higher up-front costs, more maintenance and cramped space. Suppes presents his green product as "a home of the highest quality that never compromises its beautiful aesthetics." As Suppes states, "homebuyers can enjoy a home of their dreams that's built sustainably."

Suppes' goal, with his most recent project, was to show that a certified passive house could work well for a conventional style home. Passive House was founded in Germany and supported by the PassivHaus Institut. The designs in Europe are typically small and boxlike and thus easier to make air-tight and insulate.

Before Suppes arrived to provide an in-depth tour, I spent time poking around looking for how the house was different from a traditional home.

With the windows closed, it was quiet like an old stone cathedral. No loud landscape blowers from the neighbors penetrated the passive house. Being sensitive to drafts and varying temperatures, the uniformity of temperature throughout was appreciated. I also noticed some high-tech European appliances.

But most importantly the home was open and bright. I could picture myself living there.


Upon his arrival Suppes presented me with technical information on how the house was engineered and built.

One area where Suppes needed to make a decision on aesthetics versus performance was the front door. Suppes installed a door that provided 16 percent less performance than a more robust but plainer door. He was worried about the air tightness test, but other components made up for the more attractive Mission style front door. "The entry sets the tone for the entire house," he said.

One big benefit that may not be obvious is the air quality. "The passive house is significantly healthier and more comfortable to live in," Suppes explained. "Even with all those leaks, a traditional home does a poor job providing clean air. An EPA study found that indoor air quality is often more polluted than the outside air. With one in five Americans suffering from allergies, asthma or other chronic conditions, filtered clean air is a big relief. 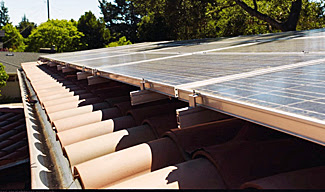 Even for those less sensitive, the house avoids the stale air syndrome that occurs when occupants are working or sleeping in a closed room. In the passive house, fresh air is continually recirculated throughout the house.

With fewer mechanical systems such as traditional heating and A/C requiring maintenance, the house is low maintenance. The appliances that do require maintenance, such as the HEPA filters, are easily accessed and maintained. The HEPA filters may be washed in the sink or dishwasher.

Suppes found that his near zero energy homes were well received even in the trough of the housing slump of late 2008 -- through 2009. While other homebuilders had trouble moving inventory, Suppes credits his green homes with keeping his company in the black.

His most recent project, the certified passive house was purchased by a well-known Silicon Valley entrepreneur and venture capitalist. He and his family recently settled in and are living happily and sustainably.

Suppes predicts that "all homes in the future will be built to this [near zero] energy standard." My hope is that energy efficient homes are also built using Suppes' aesthetic approach. In this way, Suppes reminds me of another Silicon Valley resident, Steve Jobs. Jobs with Apple pioneered not only technically compelling products but also products that are aesthetically pleasing and easy to use.
Images courtesy of Clarum Homes.