We’ve all heard about Canada’s win over the US in hockey at the 2010 Olympics. But there was also a decisive victory in shifting commuters to greener options. In preparation for the scores of visitors that would arrive for the Olympics, Vancouver’s transit authority asked for a commitment from businesses to reduce traffic by at least 30%.

I chatted recently with SAP, one of the businesses with offices in downtown Vancouver, to learn more. I was especially interested in finding SAP executives who not only “talk the talk” but also “walk the walk” (or bus, or bike, or car pool).

Prior to the Olympics, more than sixty percent of SAP’s staff in Vancouver already used green commuting options. SAP’s pre-Olympic commute modes are compared to typical Canada, Vancouver, US and the University of Califonia Los Angeles (UCLA). Los Angeles was the host of the 1984 summer Olympics.

Although Canada and Vancouver are better than US patterns, SAP was able to significantly shift commuters to green methods.

TransLink, Vancouver’s transit authority [Note 1], visited SAP well before the Games began to elicit support for the city-wide program to reduce traffic by increasing green commuting. Kirsten Sutton, VP and Managing Director of SAP Labs explained, “This was an excellent challenge for everyone to change their behavior slightly, and reap the rewards. We had a real opportunity to leave an Olympic legacy of eco-friendly commuting as a permanent change.”

Both the city and SAP are still compiling the stats [Note 2], but the immediate Olympic goal was achieved and they are on-track to sustain the greener commute practices.  Kirsten Sutton is one of those employees who made the switch during the recent Olympics pledge. Kirsten used to drive alone but now rides the bus. Kirsten’s transit pass is subsidized by SAP as well as those for all other SAP employees.  Kirsten recently tweeted that even though the Olympics are over, she plans to continue to ride the bus. As she confided, “You can teach an old dog new tricks.” 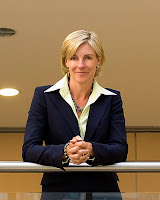 SAP’s downtown location also contributes to make greener options just as convenient as driving solo.  Janet Wood, EVP SAP Go-To-Market Maintenance lives a few blocks from the SAP office. In her role, Janet travels internationally, but when at home, she can be seen strolling down Mainland Street under an umbrella or sporting her sunglasses. Should she walk briskly enough to break a sweat, SAP provides shower facilities. For those that prefer to bike when going self-powered, SAP built lockers and a bike room.


The civic pride produced by the Olympic event was a huge boost to SAP’s green commute program. Even without the Olympics, we can all win in commuting by applying the lessons learned. Leaders can create a buzz, define a “big, hairy goal” and model green behavior. Sutton expressed, “I am thrilled to see the uptake in greener forms of commuting amongst the 1,200 passionate employees here in Vancouver. We not only reduced our carbon footprint, we also increased fitness, wellness and found pure enjoyment in the simple act of getting to the office and back every day.”

Related Posts:
As explored in previous posts, the challenge in shifting employees to green alternatives for commuting is to find the right combination of incentives to overcome adoption issues.