In the months preceding the 1984 Summer Olympics, employers in the Los Angeles area were encouraged by the Southern California Transportation Authority to find ways to reduce travel during the Olympics. The University of California at Los Angeles (UCLA) seized the challenge and established its commute program that currently attracts 47% of its employee population. One mainstay of its program is the van pools which currently transport over six percent of its employees. Recently, I chatted with Penny Menton, associate director of UCLA Transportation department who was has been involved since the start of the program.

Long before there was private bus service sponsored by an employer such as Google or Genentech, van pools have been filling the gap where public transportation is unavailable. UCLA operates one of the oldest van pool programs in the country, with over 25 years of service. [Note 1] The university owns and maintains the 160 vans, establishes and collects fares and ensures drivers are trained and complete certification. 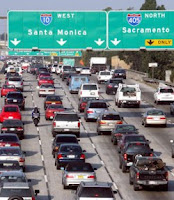 The UCLA van pool will save the typical rider 70% compared to driving alone when considering gas, insurance and parking costs. [Note 2] In much of the LA area, the van pool is faster than driving alone and allows the rider to pursue other activities. Modern vans offer comfortable high-backed reclining seats with individual reading lights to provide a private, quiet space for each rider.

Its small size allows UCLA to offer varied schedules that are tailored for different riders’ needs. For example, UCLA provides fourteen day routes and one off-shift from Palmdale. During the day, vans arrive at UCLA from Palmdale starting at 6AM until 9:30 AM. A more typical example is two to four vans serving an area.

Van pools – like other alternative commute methods - work best if the concerns preventing adoption are resolved. Specifically green commuters who are abandoning the flexibility of their car
Marketing is critical with any alternative commute method. Word-of-mouth, peers as role models, try it - you’ll like it programs have all been used effectively at UCLA. “People relate to their peers. Consequently they are more inclined to take a chance and do something different when they see or hear about a peer already doing it,” Penny Menton observed. In recent years, web 2.0 technology has been incorporated to reach a broader and more tech-savvy audience.

Google and others who operate private bus services do not disclose their precise costs, but back of the envelope estimates comparing bus to van pool indicate that van pools are more cost effective to operate and could therefore be offered by more employers than a bus. Although frequently subsidized [Note 3], employees usually pay toward a van pool while private bus services are frequently offered free of charge. 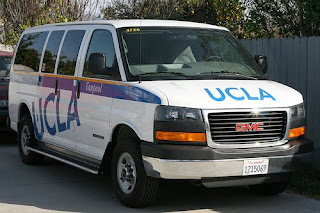 To further ensure cost efficiency, UCLA started a seat-filler program. Riders go stand-by and fill unexpected vacancies. Penny Menton reported that “many stand-by riders are able to fill a seat every day.” When a full-time seat comes available, a stand-by has first priority to become a regular rider. UCLA also leases seats for planned absences such as vacation and jury duty.

Van pools are a viable and cost-effective part of a green commute program. [Note 4] Van pools should be implemented in those geographies where public transportation is limited. [Note 5] Without such an alternative, employers with large populations of employees in remote areas will be unable to achieve the gold standard for a greener commute.

Notes
Note 1: Many claim the date of first van pools as 1979. The oldest multi-employer vanpool program in the country is in Treasure Valley, home to Boise Idaho. The Seattle King County Commuter Pool was the first publicly financed van pool service in the United States, organized in 1979.

Note 3: Monthly fares on a UCLA van pool are subsidized by the University by 34% (compared to non-UCLA employees). Fares range from $109 - $220 per month.