SUN Microsystems completed a major consolidation of its global data centers --- nearly 40% reduction in space. A green benefit was an impressive reduction in energy consumption.


SUN’s strategy was to define and deploy a standardized and modular data center computing unit. A single design effectively scales-up to handle a broad range of profiles from small lab to mega data center.

Dean Nelson, Sr. Director of Global Lab & Datacenter Design Services provided me a tour and tutorial recently. Dean and his team have generously shared their best practices, which are available for free download from the SUN site. A few may also be found in the resource section at the end of this post.

The technical concepts are highlighted by a gray box and may be skipped without diminishing one's understanding of the business approach and benefits.

Goals
SUN started on its data center journey about five years ago. The primary goals were to 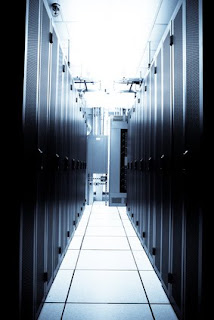 
The traditional data center design could no longer be enhanced, a new approach was required.

Modular DC
As with all elegant designs, the new design is deceptively simple. SUN created a modular data center design by deploying standardized “pods”. As Dean Nelson, explained “A pod is an energy-efficient building block that can be duplicated easily to create a data center of any size in any location.” 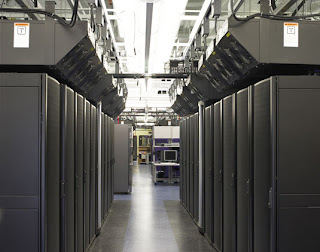 Implementation
SUN made a sizable investment of $250 million over several years, or approximately $300 per square foot average across new and existing space which included server upgrades, environmental and power infrastructure equipment and improved server utilization.

Less real estate
As part of the consolidation, servers were upgraded to gain more compute power in a much smaller footprint. From 2,000 the average compute power has tripled.

Energy Efficiency
Next generation servers use less energy for comparable amount of work, but they provide a great deal more compute power. As compute power increases, more heat is generated in a smaller area. Consequently the heat gain is more sizable and the cooling more challenging. This is analogous to a space heater that is more effective in a small room than a larger one.

Without dramatic changes in cooling strategy, the energy consumed for cooling the identical compute power would have been greater. Rather than cool the entire data center as one unit, the cooling break-through was to decentralize cooling and cool each POD individually. Dean Nelson explained that “the POD improves cold air delivery and allows the DC to operate at higher temperatures”.

DC Efficiency Metric
More of the energy in the DC is now used to power the equipment rather than expended on cooling and other activities. A typical DC according to Department of Energy consumes 53% of its energy in cooling, other environmental conditioning and lost power. SUN is now only consuming 22% for these other activities which is 58% better than average. (Some statistics for the DC operators: Average PUE 2.13; SUN’s PUE 1.28)

Flexibility
One other benefit of the modular data center design is faster and less expensive installation to handle on-going changes to servers and racks. Dean Nelson reviewed how “It is now much less expensive to “snap-in” extra compute power since the power infrastructure was pre-configured to handle a range of power requirements.”

Future-proof
Traditional data centers usually build out the power and cooling for the maximum forecasted load. Dean Nelson shared that SUN took a different approach where “the infrastructure is also modular allowing it to grow to satisfy new requirements. This saves both capital and operating expenses.”


Technical Details on building for the future

Conclusion
Now that SUN has worked out the kinks, these strategies and techniques can be used for any size data center with any computing profile. Not only new data centers, but an existing data center can benefit.

SUN’s Bangalore data center is such a scenario. As Dean Nelson reviewed, “Bangalore presented the challenge of working within the existing office building’s power, space and cooling . Also no servers were replaced during the project. Despite these constraints, we were still able to reduce our space consumption by slightly more than half while reducing our power use by 17 percent.”

Even more benefits could be achieved if combined with a tech refresh. A business is then able to extend the life of its current data center and operate it at a lower cost.