Get On The (Google) Bus

Part 1: Green Commuting at Google
Google has launched two innovative programs, the Google bus service and a small fleet of hybrid cars in addition to more traditional commuter programs. Given that transportation accounts for more than 50% of the greenhouse gases that are emitted in the Bay Area as reported by the Bay Area Air Quality Management Board, Google’s efforts on commuting is an important contribution.


Introduction
Last week I visited the Googleplex in Mountain View and my knowledgeable and gracious host was Lacy Caruthers, responsible for green business and operations strategy.

Employees of Google may get a scratchy nose from the 100% post-consumer recycled tissues, but that is the only sacrifice they need to make to support a green and sustainable corporate lifestyle. Google, at its main campus in Mountain View and throughout its other global locations has deployed best green practices for its transportation, facilities, data center, and purchasing that optimize people, planet and profits.
As with many great ideas at Google, many of the green programs started with a suggestion by a Googler. This bottom-up approach to sustainability has achieved excellent participation from employees.
The Google Express
The most significant innovation in transportation is the Google bus, an idea from a Googler. Other companies have established bus service for the last few miles to ferry employees from major public transportation hubs, but Google with its bus services has become the primary mode of transport with routes tailored to its employees to provide nearly door-to-door service. The initial benefit of the Google bus was to attract and retain employees that would otherwise have a difficult commute.

Since its inception, it has grown to a fleet of over 30 bio-fuel buses operated by Bauer’s Intelligent Transportation handling approximately 1,500 riders daily and nearly 150 trips to more than 40 locations. Each bus is equipped with the latest technology to allow Googlers to work productively while on-board. Since Google’s introduction, companies including Microsoft, Yahoo, Genentech plus others have also launched a similar bus service.


That the Google bus attracts over 20% of its headquarters’ workforce is astounding given that the California average for public operated buses is only 4% according to the U.S Census Department.
This private bus fleet is successful because first and foremost it is time effective for the employee – using public transportation for many of the routes served by the Google would double, triple or even quadruple the commute time. The security, comfort and high tech communication facilities allow the employee to work or relax and the personalized routes make it nearly door-to-door, which together provides a superior experience to driving. A private bus becomes an extension of the latte sipping lifestyle of the professional class who may find a public bus archaic.
An added incentive, but not the primary driver, is Google offers the bus transport free of charge.
To overcome a frequent worry that keeps potential riders from using alternative transportation, Google also guarantees a ride home should there be an emergency. One other reason that employees want to keep their cars for commuting, is to run errands during work. Google provides a plethora of on-campus services plus its famous cafes allow employees convenience without a car.
The cost of this private bus service is not disclosed by Google, but Bauer who runs the Google operation, recently launched a public service from Marine to SF and SF to Silicon Valley and charges $8 - $9 each way.
Some companies may balk at the costs, but there are real benefits to be achieved: extra hours of employee productivity that would have been wasted on a commute, employees at work rather than telecommuting, able to attract and retain employees and with the recent approval of cap and trade, the carbon savings will have monetary value.


Of course, other companies could choose to establish a bus fleet and not pay the entire fare for the employees to reduce costs and still achieve benefits. Google now that its service is established could probably realize similar ridership volume with employees contributing to the service.
One other option is to band together with other companies. Back-of-the envelope calculations indicate that many Google routes are under-utilized and Google may want to consider opening those routes to employees of nearby companies to share the costs and more importantly share the benefit s to the environment. Since the program started as a way to attract employees, Google may want to work with a company not in direct competition for engineers.
Some may conclude that the commuting mess is partly the fault of business suburban sprawl and Google stepped in to act where public transportation was unable t 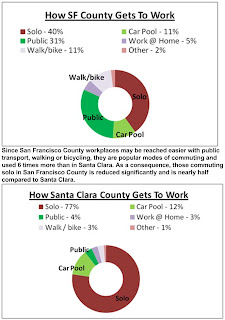 o fill the gap.
Public Transport Impractical
When there is no concentrated core of businesses in the suburbs, it is difficult to provide viable public transportation --- even if the routes are put-in-place, the travel time makes it unattractive.
In contrast, high density corporate locations such as San Francisco are served efficiently by public transportation even from the remote suburbs. The modes of commute in San Francisco County are dramatically different from all the other counties in California where only 40% drive alone in San Francisco County and more than 53% use alternatives. (Please click on chart to expand.)
High density can also be achieved in the suburbs with mixed use business, retail and housing or even high density business parks. Since few companies have the resources to establish a Google bus, the opportunity is for the cities, citizens and businesses to work together to enhance land use and create transportation options beyond the car.
Cars To Go

Google has also deployed a fleet of eight plug-in hybrid cars that are free to employees to use for commuting or other trips. The cars may be recharged at Google’s solar panel carport. Although this small fleet is more experimental than a full fledged program, this is an important concept that deserves further expansion for other reasons.
Companies where employees do a lot of business travel using their personal vehicle could benefit. Nearly three quarters of all business trips in the U.S. are less than 250 miles and most employees use their own vehicles according to Department of Transportation. These 335 Million estimated business trips by personal vehicle cost $25B and create 600 million tons of GHG annually. The reduction of cost to business and the environment from shifting employees from their inefficient and dirty cars with an average of 21 mpg to cleaner and less costly vehicles are enormous.
Traditional Commute Programs

Other Google programs include more traditional approaches such as support of car pooling, subsidies for public transportation and incentive for self-powered commuting.
Google did not have available the break-down of its commuting patterns, but it appears that it has shifted the most employees to its bio-fuel buses rather than car pooling or public transportation.  One area where Google could improve is to keep statistics year-over-year to measure progress and to aid in determining what further improvements could be made.
Goggle does not emphasize telecommuting, which is popular with some companies. With its highly collaborative work-style, Google makes the physical work environment attractive and green to encourage employees to work on-site.


In part 2, Google facilities are reviewed >>